Not Finding What You're Looking For?

Head over to our contact page and tell us what you’re looking for and we’ll handle the rest!

The Ultimate Pallet Guide: Everything you need to know

The Ultimate Pallet Guide: Everything you need to know 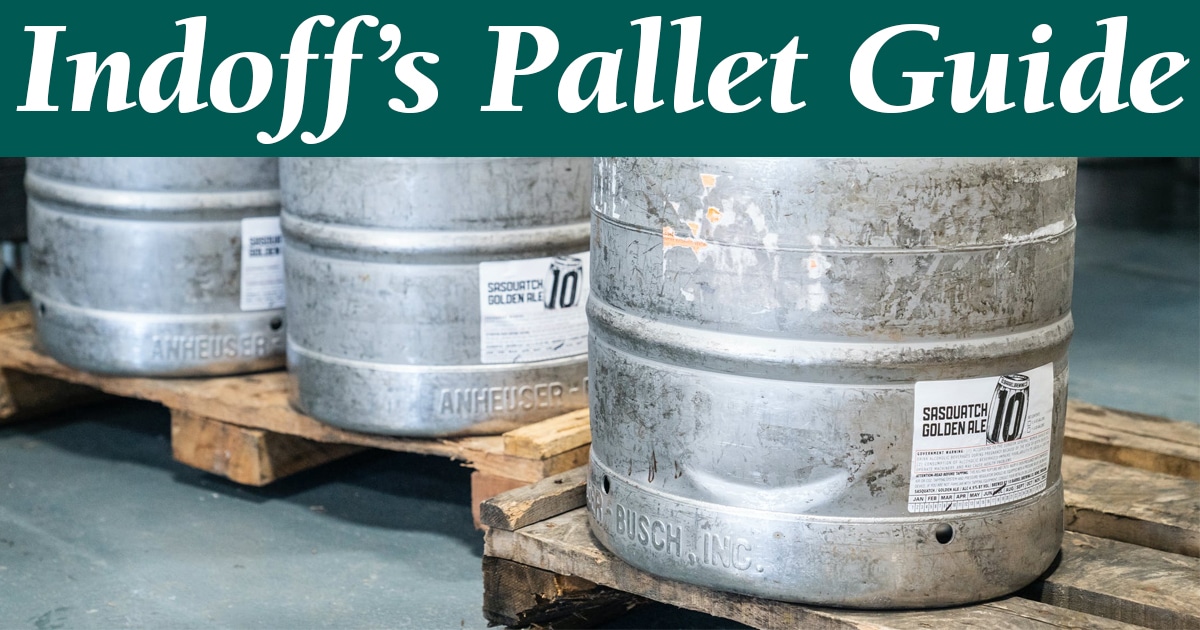 History of the Pallet

Some say it’s money, but really pallets make the world go round. Pallets are found in warehouses all over the world but believe it or not this wasn’t always the case. They have only recently come about in the last 80 years. Previous to the creation of pallets, civilizations relied on skids to store their materials. Although we don’t know exactly where and when skids were invented we have seen them used throughout history dating back to ancient Egyptian times.

During the industrial revolution, new designs were being submitted for lifting platforms. The skid was going to slowly become phased out as pallets became more common. This process was sped up during World War II due to the need for increased efficiency while utilizing fewer resources. After a team studied multiple options they concluded that forklift trucks and pallets were the most efficient system to utilize.

From that point forward, businesses began to utilize wooden pallets to transport heavy loads across their facilities. As globalization began to take hold, standardization began to happen. Today, we have international laws and regulations regarding pallet sizes, materials, and processes that must be followed. As the material handling world continues to change we’ll surely see additional evolutions to this basic yet effective invention that we know as the pallet.

Parts of a Pallet 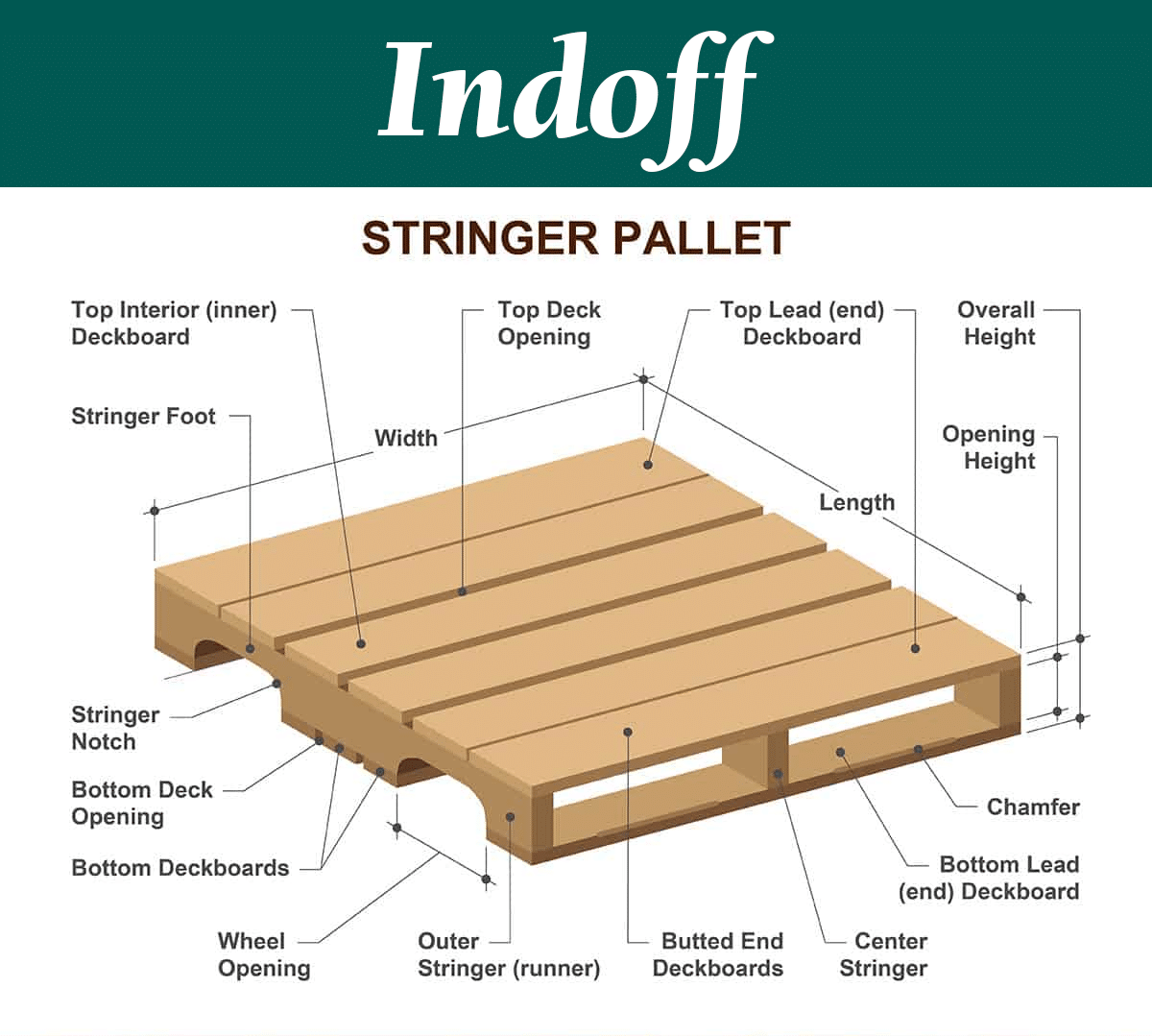 Top Interior Deckboards are the pieces of wood located between the leads.

Butted End Deckboards eliminate the space between the lead deck board and the next interior deck board to provide a thicker perimeter on the edges.

Bottom Lead Deckboards are located on the bottom of the pallet to provide a stable, even base that provides more support.

Stringer Boards are spacers that also provide support for the top deck.

Stringer Notches are cut out of the stringer boards to allow for the entry of the forklifts. They can be cut to provide two-way or four-way access.

Blocks are a Rectangular, square or cylindrical deck spacer, often identified by its location within the pallet as corner block, end block, edge block, inner block, center, or middle blocks

What is a two-way entry pallet? A two-way pallet, or stringer pallet, is often stronger than its four-way counterparts while also being more economic to produce. The downside is that you are restricted in the flexibility making space utilization harder to optimize and we all know that space is extremely valuable and limited.

What is a four-way entry pallet? A 4-way entry design also knows as block pallets, allows forklift operators to enter and lift from any side of the platform which eliminates the need to worry about the initial placement of the pallet. Four-way pallets have several different construction styles which are listed below:

The standard pallet size is 48×40 but pallets come in an extremely wide range of shapes and dimensions. Due to the available variety, there are several governing organizations that offer rules and regulations that must be followed in order to ship within certain industries or regions. Below are just a few examples of how pallet sizes vary across the globe as well as in compliance with specific organizations such as the ISO.

Wood pallets are by far the most common type of pallet that exists today. They make up approximately 58% of all pallets in circulation with 43% being hardwood and 15% being a softwood. There are several different types of wood that are used in the creation of pallets. Some pallets are created using wood in its natural state while others are created using a manufacturing process. 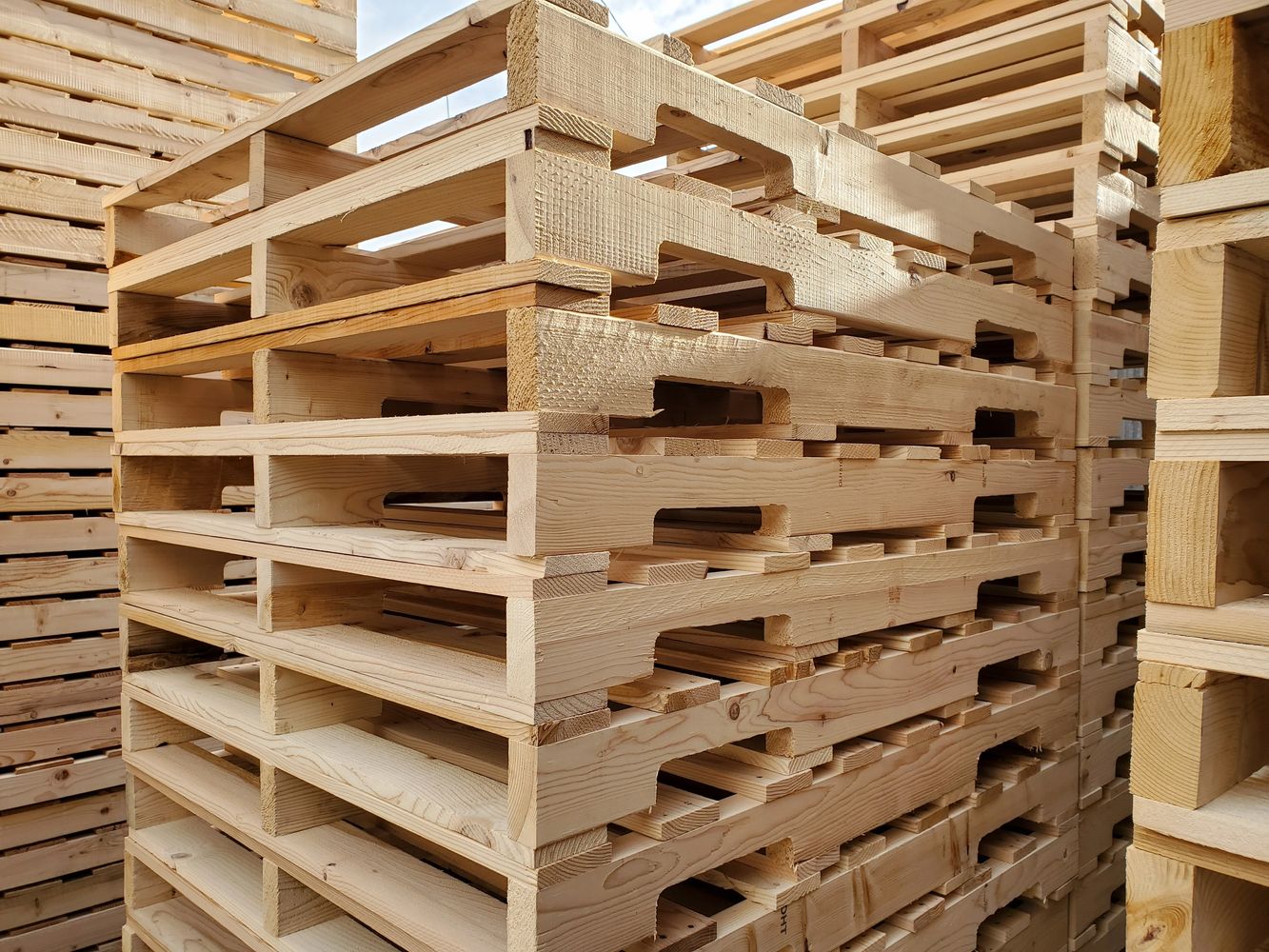 When it comes to strength and durability you don’t get much stronger than a metal pallet. Metal pallets are often used in the automotive industry as well as other sectors that deal with metal processing. Often times steel pallets follow the design guidelines of their wooden counterparts. This allows them to fit in standard warehouse racking and still be transported by forklifts and other heavy machinery. 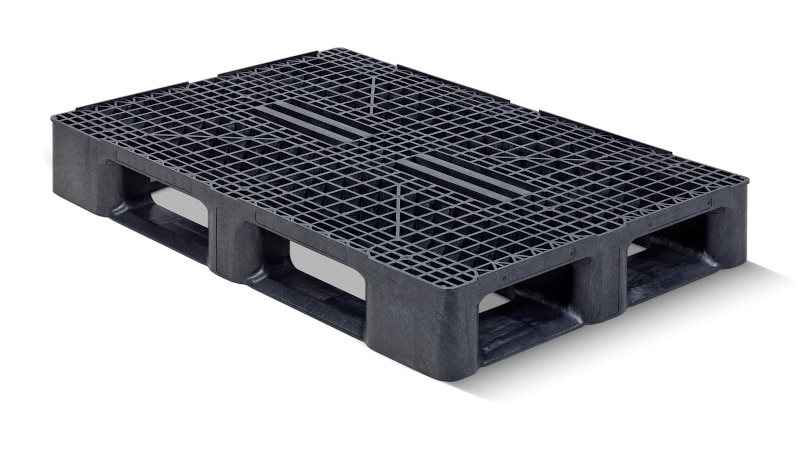 Different types of Plastic Pallets – When you’re looking for an alternative to wood pallets, plastic is a great option. They offer more durability than wood, they do not splinter, and they are resistant to chemicals and moisture. They are also easy to clean and meet all the requirements of the food industry. Not to mention they are lightweight as well as earth-friendly due to their recyclable nature construction. https://www.dacocorpblog.com/4-types-of-plastic-pallets-for-your-warehouse-operation/ 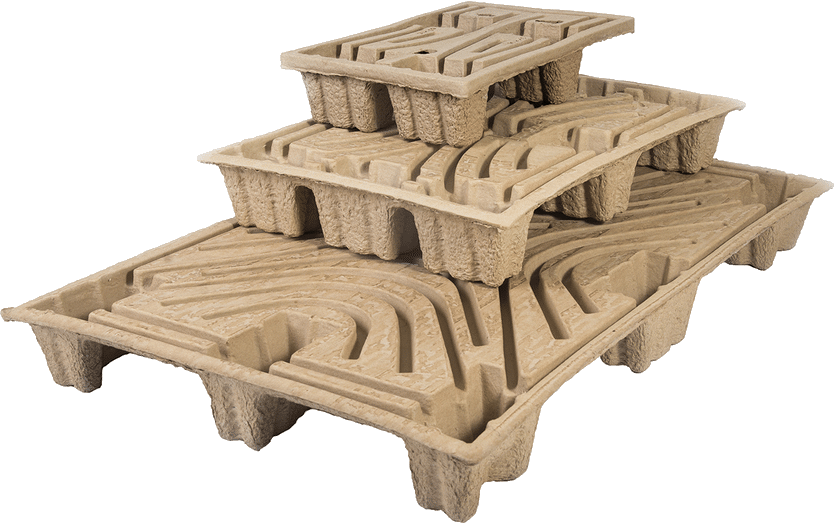 It’s hard to believe that paper can be used as a base during the transportation of heavy goods but it’s true. If you’re worried about cost or the environment then paper is the perfect solution. They are extremely cheap ranging from $5-$20 per pallet. If you’re shipping to locations nearby and offer a lighter product, then there is no need to pay for strength that you don’t need. Paper pallets come in a wide variety of shapes and materials and can be designed to fit nearly any need you may have for them.

Looking to take your business overseas? You’ll need to be well versed in international laws regarding the types of pallets you’re allowed to use and the requirements of other nations. Although we can’t cover every specific rule for every nation, below are some of the most common regulations in regards to the European Union and the United Nations.

Not sure if your pallets qualify? Speak with your local Indoff Material Handling Partner to discuss which options we have available and make the most sense for your business. Not checking all the boxes above, plus any others that may exist for each specific region or country could result in your product not making it to its destination.

What is a Skid? 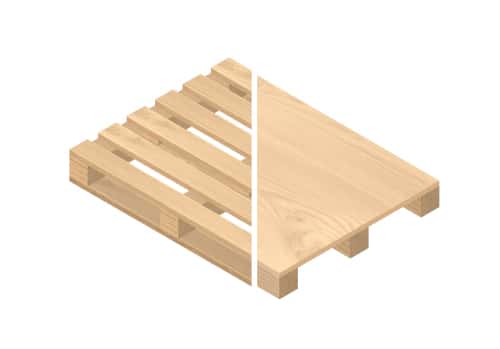 Oftentimes in the material handling world, you’ll hear the words pallets and skids used interchangeably. The fact of the matter is that they are very different and serve different purposes during the storage and handling processes. While you can probably get away with calling a skid a pallet, we thought it best to explain the differences between them.

The biggest difference is that skids have no bottom deck. This means they are oftentimes used as a more permanent storage solution as opposed to being used in transportation. Due to the missing bottom deck, they lack the stability, strength, and durability that pallets can offer. They are an option for less permanent storage or smaller transportation tasks but oftentimes companies opt-in to spend a little bit more on pallets for their added benefits.

Differences from a Shipping Crate 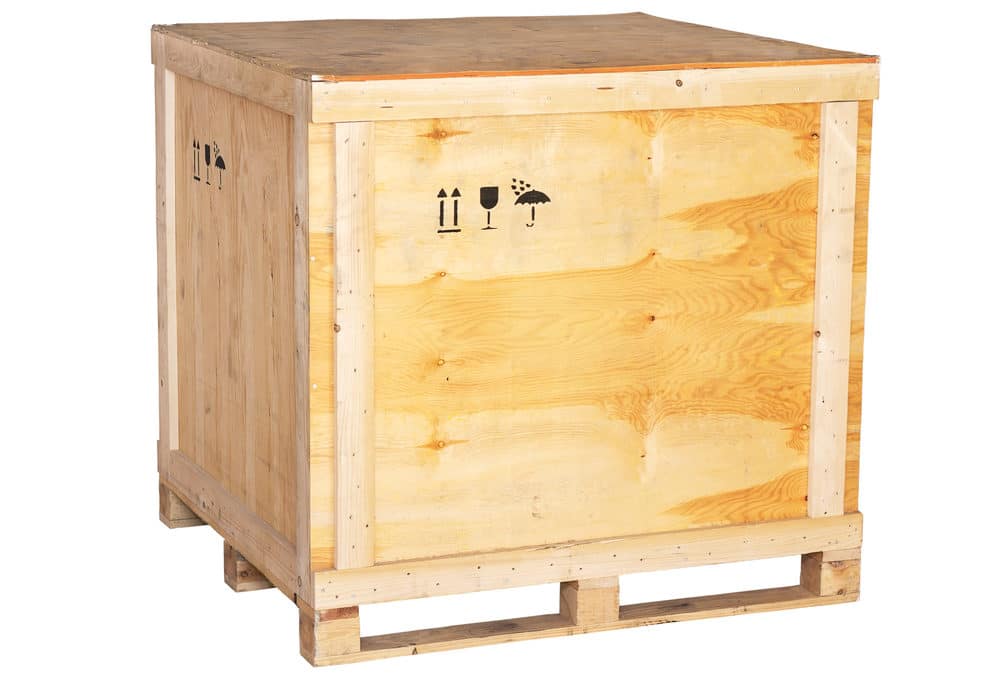 The shipping crate is drastically different from the pallet offers protection from all sides by forming a box compared to the flat design of a pallet. They are a great option for products that need extensive protection or supplies that can’t be easily bundled. They offer increased stability and additional volume but due to their shape and size, it makes them harder to transport. Additionally, they require more materials to create and as such come with a higher price tag. 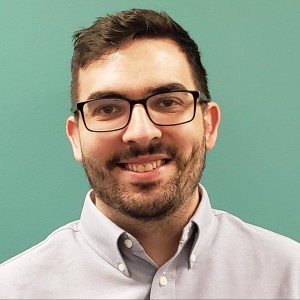 Michael Dormagen has been employed at Indoff since early 2019. He is passionate about driving business by connecting professionals looking to work together on projects to achieve the same goals.

Jim joined Indoff in 1988 after spending 5 years at Ernst & Young, where he specialized in audit and accounting for privately-held businesses. Jim is responsible for the day-to-day management of Indoff.

Wait! Give us a call!

One simple call and we can get you in touch with your local Indoff Partner to discuss your next project! Best of all it’s for FREE!

Feeling shy? No problem. Fill out the form below and we’ll still get you in touch with an Indoff Partner in your area.

John’s background includes the start up and acquisition of several successful business ventures, and he provides strategic planning and overall corporate governance.